Big shout out to the MWA for taking on stewardship of Woodworking Safety Week. And thank you Marc Spagnolo for running it all these years!

I replaced the power switch on my table saw last

night. It turned out to be more complicated than I thought, but still not very hard. The problem I was encountering was simply that the off setting wasn’t really engaging properly. That left the On switch feeling very touchy. On a couple of occasions I had to hit the off switch paddle a couple times to get the saw to turn off and stay off. And one time – I hit the off button, and after I left the area I bumped the table, and the saw turned back on! That was when I placed an order for a new switch. I found this one from Amazon Woodstock D4151

I disassembled the old switch, which had a cracked

housing. The power leads inside the switch box were pretty short, so I did have to do some manual gymnastics to get the spade lugs detached. The ground leads were attached directly to the mounting flange and came off easily.

Using the old switch disassembly as a guide, I also disassembled the new switch, including the retainer piece across the front of the switches. This exposes the spring loaded off switch, which I removed to keep it from popping out unexpectedly. At this point, it was just a matter of reattaching the power leads, ground leads, reassembly the switch in the original box.

I opted to use the old paddle, as it had the general logo, and it was a bit larger than the woodstock generic paddle. That was easily accomplished as the paddle just clips in. Now, on to the cabinet rebuild! 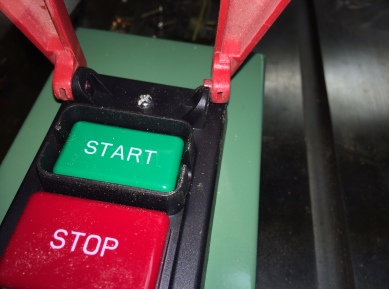