Just arrived this week – and glad to have it in hand – my new boxed rabbet plane for cutting moldings. I’ve been on the waiting list for this Matt Bickford plane since I met Matt at the Lie-Nielsen event at Exotic Lumber in Frederick Md. last spring. And being patient really paid off. Now that it’s here, I can’t put off starting the mantel work for my niece (once I get the shop put back together that is!). 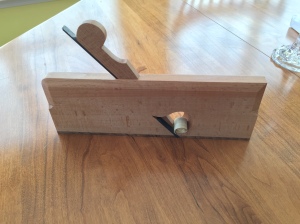 I have another project to get done,

a mantle for my niece, that I’ve waited to get started until I could get back into the shop. However, when I went down I was shop-blocked by the shop — it’s just full of stuff from the other projects, lots of cut-offs (which I finally started weeding out!) and I’ve got boxes and buckets of stuff that has been acquired over the past couple years that need gone through. And finally, I’ve been collecting stuff for the past decade(s) and haven’t really gone through and weeded out.

Well, enough is enough. I’m getting psyched up to get in the shop with two primary goals in mind:

END_OF_DOCUMENT_TOKEN_TO_BE_REPLACED

Since I built the bench last fall, I’ve used it a few times for demonstrations, and am starting to use it for projects at home as well (in addition to my Roubo bench). There were a couple of construction details that I needed to clean up that I finally took care of yesterday.

END_OF_DOCUMENT_TOKEN_TO_BE_REPLACED

Today a recent win on eBay arrived in the mail. A Union No. 60 scraper plane that had been cleaned-up and put up for sale. The plane is good working order, the sole was flat, and the threads are all working on the angle adjustment and handle mounts. The wooden handle is in great shape. The plane blade isn’t flat, but I was able to grind it to 45 degrees, and get the back flattened wide enough to be very usable. After setting a burr in place (I used the shaft of a screw driver to draw it out), I’m pulling some nice shavings. And the finish is as reflective as a mirror!

END_OF_DOCUMENT_TOKEN_TO_BE_REPLACED 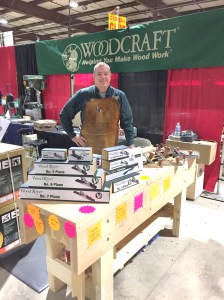 Well I had a blast at the show. I got to meet and talk with lots of people – I extolled the virtues of the simple sharpening techniques I learned from Rob Cosman, as well as the skills I’ve learned using the Wood River hand planes. I was able to do some “ooh – ahh” shavings with each of the planes, probably because I had the patience and sharp blades in hand. 🙂 Overall a successful trip for me. I picked up a couple of items (self adhesive sandpaper rolls, and sharpening trays) from the peachtree exhibit, but mostly just worked the booth.

The cabinet I built to transport the planes is going to be redone into two cabinets. I’m just not up to schlepping that much weight around any more! The knock down Nicholson had some interested folks stop by. The bench is a wonder. It’s not light, but it is portable.  Chris Schwarz is teaching a class in how to build one in Rockville (at the Rockville Md Woodcraft) this year. And I’m going to reach out to him to see if he’d mind if I did a class on it at Leesburg Woodcraft in addition.

I tried to get Shannon Rogers to attend, but he had some 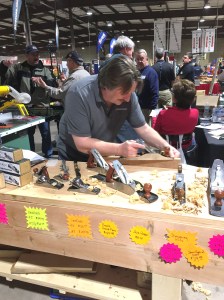 excuse about being tied up in his shop at home. Because of something that Chuck Bender had said or done with/to him. But Chuck was at the show, and was able to stop by and play with the setup as well!

It’s been pretty busy around here – I had several projects to finish up for Christmas, and I’m working at the Woodcraft booth at the Woodworking Show in Timonium Md – Jan 2, 3 and 4. My task is to setup the booth area, and run, the handplane exhibit. I’ll have my knock-down nicholson bench there as well as a display board and transport case I put together for my planes. 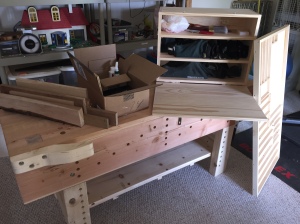 Show stuff ready to load up