Since I built the bench last fall, I’ve used it a few times for demonstrations, and am starting to use it for projects at home as well (in addition to my Roubo bench). There were a couple of construction details that I needed to clean up that I finally took care of yesterday.

The aprons on the bench were never “trimmed” at the ends, which actually interfered with reaching in and under the ends to get to the post/hold-fast/tool hanging storage. It also got in the way of sliding my “demo” box under the end to support the sharpening “stone pond”. So, yesterday I set the bench on it’s sides and marked off the corner pieces that I wanted to trim off with a speed square. It didn’t have to be joinery accurate, but I still wanted it to look nice. I slapped a track saw track on the aprons and made short work of that!

The second item that had been making me

crazy was the way the top didn’t quite reach to the outsides of the aprons. The result was about a 1/8 – 3/16 gap between the vertical off the apron, and the edge of the top. This wasn’t a show stopper, however the crochet I have fastens to the top with lag bolts and the apron with a bolt and t-nut. This forces the crochet to set at an angle to the face, which –

like I said – wasn’t a show stopper, but I found it drove me bonkers. And it did leave the inside face of boards I was edge planing unsupported at the top. So, I cut a strip of pine 6′ long, and glued it to the edge of the table that faced front – and after it dried, I planed it flush with the apron, reset the crochet, and am happy with how it turned out. Now I’m just dreading what happens in the spring when the moisture content goes back up…

Similarly, on the back apron, I had a gap. And 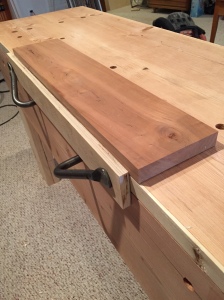 while it was functionally not an issue at all, I found that after thinking about it for two days, it was going to drive me crazy not to address it as well. So there is a thin racing stripe down the back of the table, to make the back edge flush with the apron on the far side. Well, that means I can use it for a clamping surface without that gap at the top. And since I can… Mike Siesmen shows in his DVD that a few holes spaced on the back apron can be used to hold a plane stop on he far side of the bench, to aid in traverse planing of rough stock. So as long as I’m at it, I broke out the auger bit and bored a few holes about 3″ down the apron to set hold fasts into, to hold a planing stop.

Finally, Caleb James had an implementation of a vise, using hold fasts rather than screws. (His knockdown bench project was a primary catalyst for Chris (I believe) and really did the proof of concept) This works well, and with a block of cherry I will face with a hunk of leather, I will add this in place last. All the appliances are likely to have 3/4″ holes in them at one point or another, and will hang on the pegs under either end of the bench. And being separate parts, they are still easy to transport!

The bench and project were conceived thanks to Chris Schwarz, I encourage you to check out his research and work!