So this isn’t a woodworking item, but it’s back in the electrical stuff. Yep, I still am being

monitored for GBM4, although so far nothing has shown back up. I have now been on Optune for nearly 3 months. I’m trying to keep things on and running all the time but have had a couple of setbacks. When my device is turned on with power cord or battery, it boots up, then settles into a “ready to go” mode with a single beep. Sometimes I forget to hit the “GO” button (or hit it just  a bit too soon) and don’t actually turn on the treatment. So to accommodate this, I’m trying to build a little device that runs independently of the Optune, but just pays attention to the “GO” status. A rough video showing this behavior is here.

The two “computer” parts are the arduino microprocessor board and a color sensing reader. I put some code together to read the sensor, and detect when the blue lights dropped below what I considered to be “on”. I’ve added a little piezo electric buzzer to make a sound when the blue lights seem to be off (in other words – an alarm that says CHECK IF I’M ALL THE WAY ON BEFORE YOU GO!) And as you can see, I’m migrating the build from the large stuff, to a smaller rendition, so it’s lighter, the battery lasts longer, and I can incase it in a pen tube from the shop to protect it. 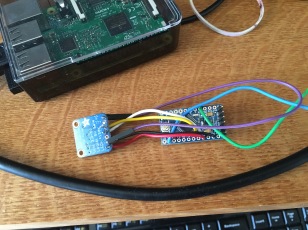