Once the groves were in place, the assembly proceeded. 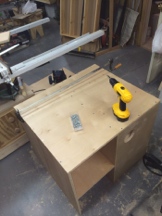 I predrilled screw holes for each of the panels, applied glue (titebond II – it’s what I had on hand), clamped the panel into the groove, and screwed it together. The glue up took about 40 minutes – I left it sit overnight to make sure it set up well, then installed the cabinet on the base. I noticed that the base had started to bend up, outside the frame where the wheels were. I pried up the base and placed some shims under it to make sure the weight was off the wheel, and the base panel straighted right out.

The top sheet (undersheet) of plywood was laid on the cabinet, between the saw rails. Next up 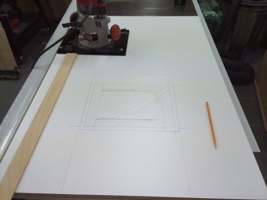 was the melamine. I cut it to the same size of the undersheet, and fit it to the opening as well. Once in place I marked out the location of the router plate. I used a jigsaw to cut out the router plate hole, undersized by about 1/2″. I was going to create a template out of MDF, to route the edges back – but again, I punked out for an easier solution. I clamped a straight edge parrallel to one edge of the pattern mark – then routed to the line. 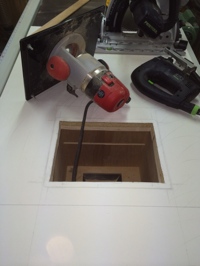 I was careful at the corners, and after all four sides were done, I had only to touch each of the corners one more time to get a snug fit. I was routing the ledge down just about the thickness of the plate, but when I set everything in place, the plate was proud by about 1/16″. I lowered the depth on the bit to accomodate, and re-ran the router around the edges again. This time the plate dropped right in flush. It doesn’t appear that I will have to use leveling screws this time – but that will depend on how things settle out.

After this was completed, I needed to attach the rails to the table top – and to do so by clamping the rails “up” to make sure the top was level with the saw table. I used two drills to create a stepped hole – the larger diameter for the screw shank, and a smaller diameter for the threaded shaft. This approach worked really well. The screws went in easily, and tightened up very nicely.

The cabinet is installed, and the router is serviceable again. Next I need to install the dust collection parts, create a hole for the power cord to feed through, build and install the door and drawers, and install the miter track in the table top. It’s nearly done! 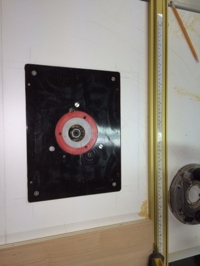 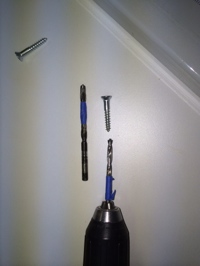 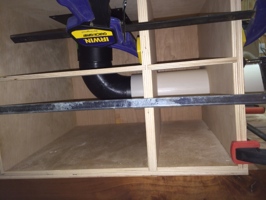