The base sheet of the cabinet was cut out

from the 3/4″ cabinet grade birch ply. I had the width ripped at the supplier, and I didn’t worry to much about it being dead on clean and straight, it’s going to be the base of a rolling unit in a shop. I expect it will get dinged up fast enough, no use worrying about the shiny finish from the start :).

The first time I laid out the base, I had to measure and measure to set the swiveling casters in place. I wanted them to be close enough to the edge that I could get to the brake, and far enough from the frame that they wouldn’t hang up on them as I pushed it around the shop. I’m using 4″ polyurethane casters because of the weight of the loaded unit and the fact that I want it to roll easily across the cracks in the floor, sawdust, and occasionally a power line (ok, that last part is not intentional).

This time time, I used the old base as a template, and just re-drilled the mounting holes for the casters. That worked out beautifully. I then used a brace and bit – with a shallow countersink bit – to inset the mounting screws so they wont interfere with cabinet placements.

The old base as a template for drilling the caster mounting holes.

Counter sinking with a shallow countersink bit and brace I picked up on ebay. (this job paid for purchase!)

The frame of the base is 4″ high, that leaves a 1″ clearance underneath, which is sufficient to allow easy movement over sawdust, I picked up the 1×5’s at the home store –

and of course did NOT sticker them when I got home. The nominal width is 4 1/2″, however I need to rip these down to 4″ to match the old design, and I don’t want to leave them too wide and have problems rolling it around. So, setting the saw cabinet back up on the old base, I re-installed the saw, rails and fence to put it back in service for a bit. The outside frame (sides) are 55″ and the ends are 28″. I opted to set the two inner frame runs at 8 1/4″ from each side. Using pocket hole screws I assemble the frame.

The frame is laid out on the top side of the base piece, and the outlines of the parts are traced out to let me know where to drive screws. I used 1 3/4″ #6 wood screws (a bunch of them) and glue, to fasten the frame to the base board. Once done, it’s just a matter of reattaching the casters – and it’s ready to move the saw cabinet on to the new base. 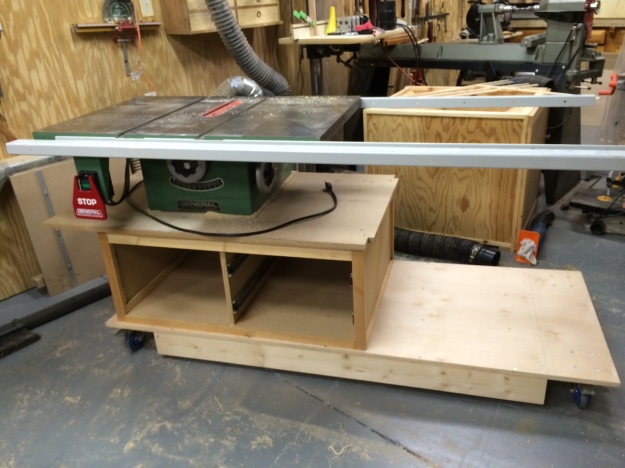 Finally – on to the router cabinet proper!

3 thoughts on “Router Cabinet Rebuild – the Base”