Ok, I admit it. I don’t just do woodwork. I also like playing with photography, and have a ham radio license (KC8MNS). It’s the latter that got me in trouble – because coupled with my professional background as a software systems architect (computer programmer) and the love of building stuff, even with electronics, I was ripe for the picking…

The initial Sketchup drawing of the pen decorator

About 6 months back Lee Hanson saw something online, and thought we might be able to build/improve on it. Lee is the store manager at the Leesburg Woodcraft where I work on weekends and teach classes. He had seen a device from Beall called the Pen Wizard. “What if” he said to me one day, “we put together a box with a power drill, but instead of running it with sets of gears (mechanical turing machine) we used a micro controller to create an electrical turing machine?”

computer programming (we have to write the controller code) — check

soldering and the chance to play with mixed material engineering — check

And so we embarked on this project. A computer controlled engraver that would etch patterns into the sides of completed pens – pens we originally turned on a lathe.

Since we both had some experience with using Arduino processors we decided that would be the starting point. I had obtained a couple of motor shields (and steppers and a servo) for work I had going with a couple toy robots, and displays that I had been using (albeit on Raspberry PI’s for bit coin miners), but since we had the parts on hand, they would be the starting point. 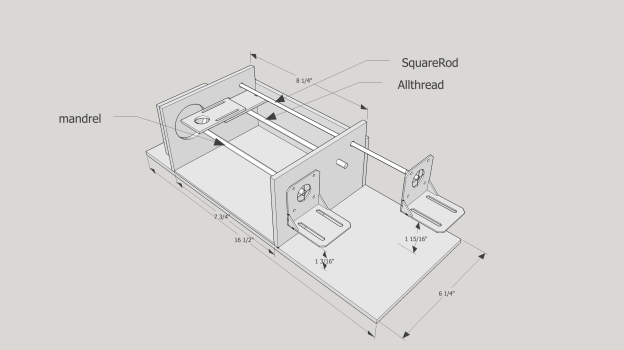 The first challenge was designing the carriage assembly that would be used. A standard pen mandrel will be used for holding the pen. Because it’s the same mandrel that is used to turn a pen, the bushings and finished pens would fit securely for engraving. The drill assembly had to support moving from left to right (the length of the pen) and raising and lowering the drill. To accomplish this, the simplest mechanism we could think of to start with was a piece of 1/4″ 20tpi threaded rod and matching nuts. The nuts would attach to a cantilevered platform, and would be threaded on the rod as a our drive mechanism. The cantilever would allow a Dremel style drill to be mounted – and with a cam installed on the back side of the platform, we could use the pivot point to raise and lower the bit for cutting.

The first mock of the carriage was done back in May of this year, in Sketchup Make. Lee acquired his CNC unit early in the summer, and converted the perforation components from the drawing to the proper format and cut out the sides and the cantilever parts using the CNC. Then I sat on my butt for the rest of the summer. This past week I finally cut the remaining parts and glued up the initial carriages. 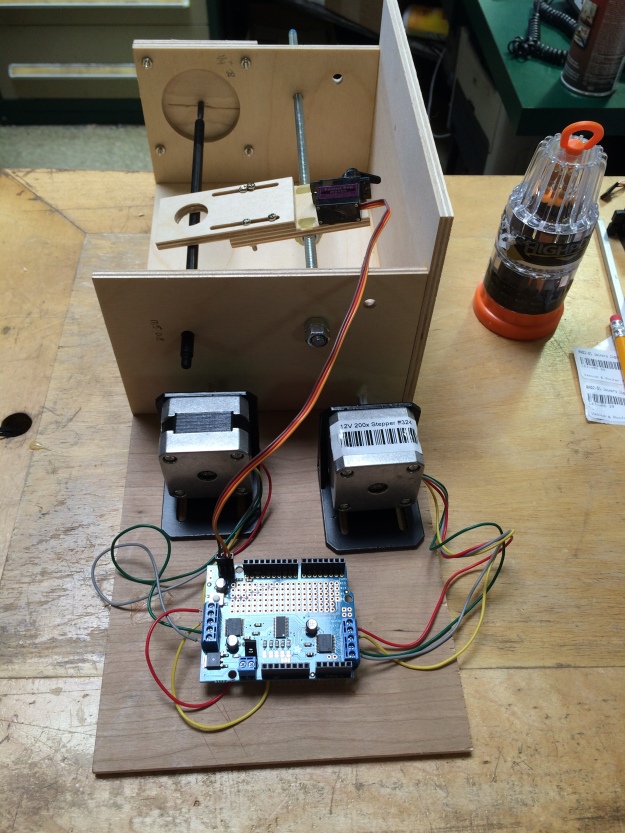