The motors that are going to be used on the decorator

consist of a servo (lift and lower the drill bit to the pen on the cantilever platform) and two steppers (one for the mandrel and one for the screw drive. The arduino comes assembled, but the motor shield and the RGB display board come as kits. All the surface mount components are already in place, I just needed to add the “big pieces” to the board and solder them in place. I wanted something to house the circuitry and the motors, and would keep them portable for working on the code. I was headed out of town for work, so I came up with a basic arrangement as follows:

– the top would have the motors mounted directly to it. The steppers would be screwed in, using the mounting plate screws that I had. The servo was hot glued in place. And a clearance window was cut to mount the controller board and display.

– the back would just be a single sheet of plywood (1/4″) to keep things in the same plane.

– I didn’t want to make the arrangement permanent, so I used double sided duct tape to hold the motors and the controller to the back board. I also used a tongue depressor, slid between the display board and the back of the top piece to relieve a bit of stress on the assembly.

Using this setup I was able to get the basic functionality started using the libraries from Adafruit. 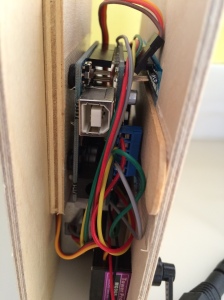 Left side showing the USB port 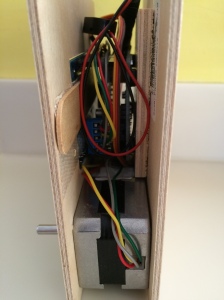 Right side, showing the wires.